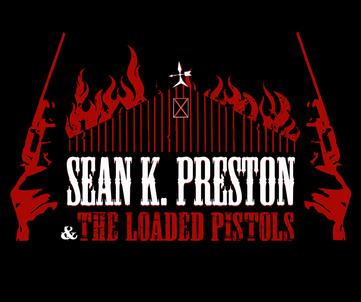 Sean K. Preston & The Loaded Pistols is a nationally touring band from Baltimore, MD. Recently signed to Rusty Knuckles, their new album “Forgive” was released in November 2018.  Currently, the group is touring the country to share stories told in the tongue of Americana, Punk Blues, Mountain Gospel and Rock'n'Roll.

The music of Sean K. Preston draws heavily on the influences of the classic heartbroken sounds of Country & Western music from the 40’s through the 70’s, the honesty of the Blues by the likes of Robert Johnson and John Lee Hooker, the bombast of 50’s Rock’n’Roll, the lyrical sophistication of musical poets like Leonard Cohen, Bob Dylan and Nick Cave, the raw energy of Punk, and the spirituality of Mountain Gospel. His own songs range from delicate laments and lullabies to fiery sermons and confessions.


"If Johnny Cash and Elvis Presley had a child, he'd probably sing like Sean K. Preston. His voice and solid grasp of Americana and roots country music make him an asset to any playlist."
Quad City Times